December 26, 2017 – The Association of Scientists, Developers and Faculties hosts the Global Awards every across the world to identify and markup them into a higher level which could be visualised into a more important standard. The year long’s suspense is now out after various degrees of ascertaining of documentation, qualification eligibility and multiple factors. The narrowing was done at multiple levels bringing out the 1001 nominations to 38.

The Association of Scientists, Developers and Faculties (ASDF International), an International Organization fostering Research and Development hosts the Global Awards to recognise people from the micro level to a greater macro level. This is extended across the Globe to choose the best out of all. The team headed by Dr. Arulmurugan Vadivelu, President of ASDF Global Awards 2017, the outright task begun in February 2017 with an open call for the nomination of the ASDF Global Awards.

With a back support from Dr. K. Maran, Vice – President – Academics who is the Director of Management Studies of Sairam Institute of Management Studies; Dr. Rajkumar Sugumaran, Vice – President – Industry who is the Senior Advisor of Techno Forum Group; Dr. C. V. Jayakumar, Vice – President – Research who is the Principal of Sairam Engineering College and winner of Previous edition ASDF Global Awards as Best ASDF Academic Administrator and Dr. R. Mahalakshmi, Vice – President – Bodies who is the Dean of GKM Group and winner of the Best Dean of the year 2012 the entire process was influentially into the track. Inline with the previous years ASDF has done an extraordinary job of hand picking the right ones on all the verticals. Certain categories were nominated, but on the rigorous process of choosing the right one, most of them were out of the track.

The categories of ASDF Global Awards may comprise the following nominees at the end of the Phase 5 nominations. For the Best Academic Administrator Awards, we have Narayanan Madeshan of Golden Valley Integrated Campus.

For the Best Academic Chairman Awards, we have Abdulla Musthaq Rashaadh of Avid College from the Maldives.

For the Best Young Entrepreneur Awards, we have Sachin Rajan Kale of Sri Tirupati Engineering Works.

For the Best Lifetime Achievement Awards, there are two finalists widely including Ganesan Ganapathy of Adikavi Nannaya University and Latha K of Anna University (BIT Campus).

The finalist though will be added into the website for the Hall of Fame had also been personally visited by a committee of the member(s) to validate and ascertain the documents submitted by every individual and institute. Always ASDF Global Awards aims at finding the right person after proper authentication and awarding them. The President of Global Awards has assured that the same trust and reliability of the Global Awards will be the primary motto and the same will be adhered with. At the press release, they also unveiled the Biography Book Wrapper. 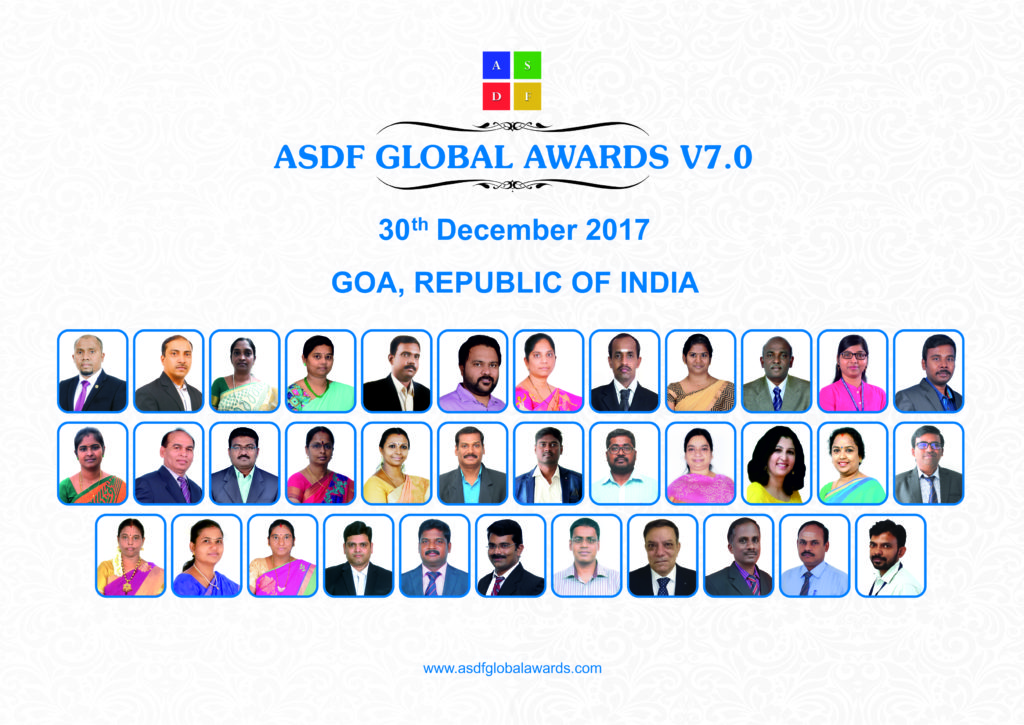 Widely closing the committee along with the International Secretary of ASDF K. Kokula Krishna Hari and ASDF President (Incumbent-India) Gunasegaran Sengodan gave an open call for all the public to be as a part of this Global Awards and witness the victory of people on 30th December, 2017 at Holiday Inn Resorts Goa, Goa, Republic of India. Along with the President of ASDF Global Awards the Global President of Techno Forum Group S. Prithiv Rajan, Julie Rue Bishop, Daniel James, Rajkumar Sugumaran, Saikishore Elangovan, Manikandan Ayyapan, Kemplong Municief and other members were present.

Post Views: 827
Menu
X
This website uses cookies to improve your experience. We'll assume you're ok with this, but you can opt-out if you wish.
Ok