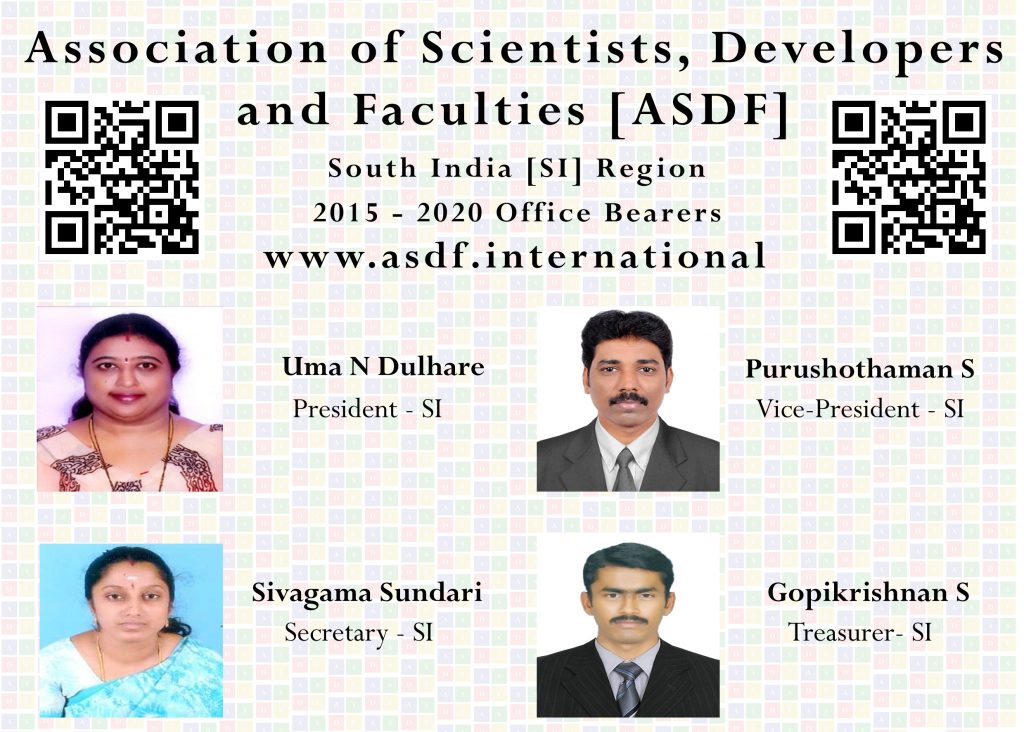 ASDF Headquarters has now announced the new set of Office Bearers South India Region which will be headed by Uma Narsariya Dulhare from 2015 to 2020. Officially announced by the ASDF International President and directed by Office of the International Secretary.

Association of Scientists, Developers and Faculties incepted in 2010 has now landed in South India (SI) region with full fledge from January 2015. The Governing Council under the leadership of visionary leader Pr. Dr Anbuoli Parthasarathy has unanimously selected the office bearers of ASDF SI Region which has got resolved in the board with the fullest support. The span of the office bearers from 2015 to 2020 of the South India Region will be headed by Pr. Dr Uma Narsariya Dulhare who is a senior academician with decades of teaching experiences across the world.

The President of ASDF SI Region for the tenure 2015 to 2020 Pr. Dr Uma Narsariya Dulhare is a Professor of Information Technology Department, MJCET, Hyderabad. She has more than 20 years of teaching experience. She served as the Head of CSE Department from 2001 to 2007 and 2009 to 2013 at CJITS. She received her M.Tech from KITS and PhD from Osmania University, Hyderabad, India .

The Vice-President of ASDF SI Region for the tenure 2015 to 2020 Purushothaman Seetharrman is a Senior Scientist from ISRO, Bangalore, India. He has over 12 years of research experience in microwave and antenna engineering. He served as a Scientist, VSSC/ISRO, Trivandrum from 2004 to 2010. He is with ISRO, Bangalore since 2010. He received his Bachelor’s degree from Pondicherry University and currently pursuing M.S (by research) leading to PhD from NIT, Trichy, India. He is the recipient of Best- Young Scientist ASDF south award-2016. He also organising Secretary for International conference of Antenna Test measurement Society (ATMS), India.

The new council has decided to concentrate on University and Government partnerships in establishing Joint Research Activities across the region. ASDF SI would like to give a thrust to research activities across the region by taking up various research studies in all the areas. ASDF SI will also undertake activities to encourage research and innovation within the industry and well as in academia / University. While initiation of ASDF SI Leadership Series will facilitate exclusive interaction between the members of ASDF and industry leaders, at State / National / International level and in turn, provide a platform for exchange of experience and technical know-how, various events will enable the members to get acquainted with the future directions, trends, opportunities and learning across key sectors through lectures by some national & international industry stalwarts. Apart from that, a series of learning and development events will also be organised for the senior leadership team of ASDF HQ & SI members such as CFO’s / Finance Heads, CMO’s / Marketing Heads, HR Heads, CIOs / CTOs / Technology Heads and other key functional heads of the organisation.

In the mid of 2017 new events are also about to be rolled out which will happen annually at South India region.

This kind of events will discuss the most relevant topics of the uptrends. The International Collaboration will enable the member organisations / bodies to participate in international delegations, both inward and outward, as well as meet people both – nationally and internationally. Schedule for all of these events will be finalised in due course.