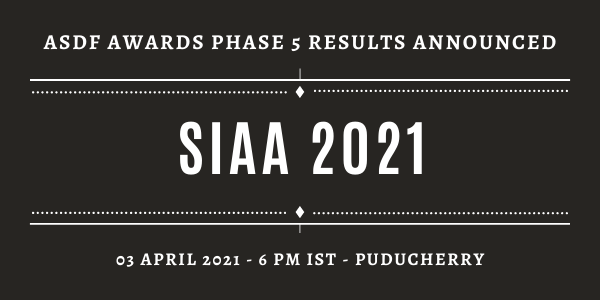 March 30, 2021 – The Association of Scientists, Developers and Faculties South India hosts the SIAA every year across South India to identify and markup them into a higher level which could be visualized into greater standards. The year-long’s suspense is now out after various levels of ascertaining documentation, qualification eligibility, and various factors. The narrowing was done in various levels bringing out the 4218 nominations to 14.

The categories of South Indian ASDF Awards may comprise the following nominees at the end of the Phase 5 nominations. For the Best Research Young Scientist Award, we have two finalists, which includes Kumar Natarajan of Sathyabama Institute of Science and Technology, and Sourav Poddar of National Institute of Technology Tiruchirappalli.

For the Best Academic Familiar Male Faculty Award, there is one finalist, Mohamed Salim S A of Mohamed Sathak Polytechnic College.

For the Best Women Scientist Award, there are two finalists, which include Pavithra B of Centre for Nano Science and Engineering, IISc and Siva Ramya Sanam of CSIR-National Environmental Engineering Research Institute (NEERI).

For the Best Distinguished Scientist Award, there are two finalists, Muralidharan Velappan of AMET University and Marslin Gregory of Sathyabama University.

For the Best Young Researcher (Male) Award, we have one finalist, Kolli Balakrishna of GITAM University.

For the Best Academic Circuit Faculty, there is one finalist, Pushparajesh V of Jain University.

The winners & finalists, though they will be added to the website for the Hall of Fame, had also been personally visited by a committee of member(s) to validate and ascertain the documents submitted by each and every individual and institute. Always South Indian ASDF Awards aims in finding the right person after proper authentication and awarding them. The President of SIAA has assured that the same trust and reliability of the SIAA will be the main motto, and the same will be adhered with.

Widely closing the committee along with the SIAA President, Dr Avinash Sundaram, gave an open call for all the public to be as a part of this SIAA and witness the victory of people on April 03, 2021, at Pondicherry, India, at 6 PM IST virtually.